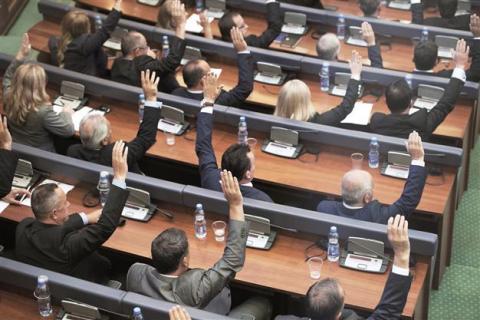 Kosovo lawmakers vote during a legislative session in Pristina in September. Kosovoâs parliament has failed to elect a new speaker and a new government for the second time, deepening a governance crisis. AFP photo

Just when Kosovo appeared to be heading for a degree of stability and normalcy, feuding politicians and fresh corruption scandals have plunged the fledgling Balkan nation into its worst political crisis to date.

A quirk in the young nation's constitution has left Kosovo in a seemingly unfixable political deadlock that could yet force fresh elections only five months after the last vote.

The constitution decrees that the party with the most seats gets to appoint parliament's speaker and try to form a government.

That means the Democratic Party of Kosovo (PDK) led by former guerrilla Hashim Thaci, which has been in charge of the country since it declared independence from Serbia in 2008.

But a coalition of opposition parties have banded together to repeatedly block the PDK's choice for speaker and attempt to form their own government.

It appears there is no way out of the stalemate since the constitution does not set any deadline for electing a speaker nor any limit on how many times the issue can be put to a vote.

The PDK might be the biggest party -- still riding the popularity its leaders earned during their insurgency against Serbian forces in the late 1990s -- but with only 37 deputies in the 120-seat parliament it has little hope of governing alone.

If the stalemate continues, says Pristina-based analyst Belul Beqaj, it could deal an "irreparable blow" to Kosovo's international standing.

"Kosovo is losing any resemblance to a normal country and is slowly taking the path towards becoming a failed state," he said.

Beqaj fears Kosovo will once again be forced to fall back on support from US and...