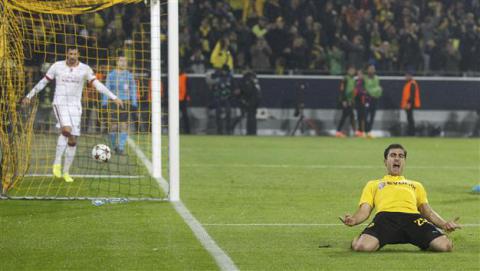 Cesare Prandelli said his side needed more time to get better following a 4-1 defeat on Nov. 4 at Borussia Dortmund in the Champions League.

German international Marco Reus, on the transfer wish-list of several leading European clubs, slotted in the first goal after 39 minutes.

Central defender Sokratis Papastathopoulos, who also hit the woodwork, and Ciro Immobile netted in the second half before Semih Kaya added an own goal with four minutes left as Dortmund made it four wins from four games in Group D to book its place in the next round with two more games to go.

Galatasaray pulled one back through Hakan Baltaâs header in the 70th minute but could do little to counter Dortmundâs attacking punch.

Dortmund has 12 points in Group D, five ahead of Arsenal, which drew 3-3 with Anderlecht (two points). Galatasaray is bottom on one point.

It was the fourth four-goal loss for Galatasaray in the seven official games it played since Oct. 1.
Prandelli said the team needed improvement and patience.

âSome things did not work out the way we had hoped,â he told reporters after the game. âOur passes did not penetrate their defense. We made too many individual errors. We have to keep improving and continue to work on eradicating those mistakes.â

The Italian coach said he was not surprised to face fierce criticism from the supporters, once again setting the clubâs target as success in the domestic league.

âIt is normal to be criticized when there is no success â thatâs part of the job,â he added. âIt is not an easy job, but we can take it. We try. Our goal is still winning the league and we continue to work on that, even in a situation such as this. We are leaving the pitch with...