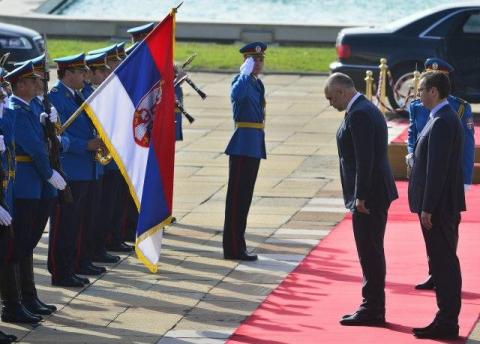 
BELGRADE -- On Monday Albanian Prime Minister Edi Rama is visiting Belgrade, which is a historic event in the diplomatic relations between the two countries.

The last visit by a head of the Albanian state to Belgrade was recorded in 1946 when Enver Hoxha met with Josip Broz Tito.

The arrival of the prime minister of Albania would have been far less dramatic had there not been for an incident on October 14, during a UEFA qualifier football game between the teams of the two countries, which was abandoned after a drone carrying the map of the so-called Greater Albania was flown over the pitch.

The story then developed in an extreme manner, with Albanians celebrating the incident across the region and more incidents occurring in Macedonia, Greece, Austria, followed by unrest in Serbia when businesses owned by Albanians were targeted.

Edi Rama, whose visit was postponed due to the incidents, was welcomed today in front of the Palace of Serbia and then met with Serbian Prime Minister Aleksandar Vučić. This will be followed by a plenary meeting of the delegations of the two countries.

Vučić and Rama will address reporters after the signing of agreements.

They spoke on the telephone on October 19 and agreed that the incidents during the football game were "very unfortunate" but that they should not miss the opportunity to meet and work to maintain regional...