India gets minister for yoga and traditional medicine 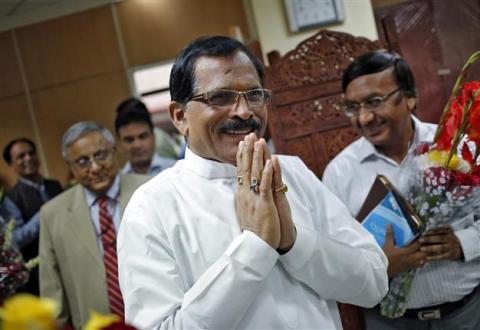 Shripad Naik, India's new minister in charge of the department of Ayurveda, Yoga and Naturopathy, Unani, Siddha and Homeopathy (AYUSH), greets the media as he arrives to take charge of his office in New Delhi November 11, 2014. REUTERS Photo

India has set up a ministry to promote alternative therapies such as yoga and traditional ayurveda medicine, as Prime Minister Narendra Modi embarks on a mission to raise awareness and the appeal of home-grown health treatments.

Modi has repeatedly called for greater use of India's health remedies and exercises, part of a push to promote traditional learning. During his first address at the United Nations in September, he encouraged more people to take up yoga and called for an International Yoga Day.

"This is our system and it has not received enough prominence. We will take it to the masses," said Shripad Naik, who took charge of the ministry on Tuesday.

The formation of the ministry comes days after the government unveiled plans to set up a regulator for traditional drugs. India wants to expand its presence in the estimated $100 billion global market for alternative medicine.

Ayurvedic and other types of traditional medicine, called unani and siddha, are popular in smaller towns, and yoga has a huge following across India and in the West. Homeopathy also finds wide acceptance in India.

Use of traditional medicines is also promoted by country's most popular yoga guru, Swami Ramdev. He sells ayurvedic medicines and holds yoga camps attended by thousands in India and abroad.

But critics often question the effectiveness of traditional remedies over modern medicine. Modi said on Sunday ayurveda and mainstream drugs were not mutually exclusive.

"There is a need for larger awareness in ayurveda. It can't be limited to a doctor only. Our ancestors made good health a part of life," he said.

The success of the new ministry would depend on additional budgetary...

'New normal' anything but as countries continue to reopen