US denies plans to change strategy in Syria 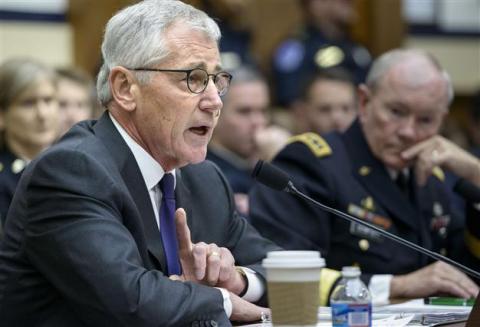 Chairman of the Joint Chiefs of Staff Gen. Martin Dempsey (R) listens while US Secretary of Defense Chuck Hagel speaks during a hearing of the House Armed Services Committee on Capitol Hill November 13, 2014 in Washington, DC. AFP Photo

Senior U.S. officials have denied that the Obama administration is reviewing its Syria policy to include the ousting of Syrian President Bashar al-Assad in the program, reiterating that Iraq remains the current focus.

U.S. Defense Secretary Chuck Hagel and Army General Martin Dempsey, the chairman of the Joint Chiefs of Staff, told a congressional hearing that the focus remains on helping Iraqi forces defeat the Islamic State of Iraq and the Levant (ISIL) inside Iraq.

The remarks followed a CNN report on Nov. 12 indicating that the White House rethinks its policy amid complaints from coalition partners such as Turkey and Saudi Arabia that want al-Assad removed.
âThere is no change in strategy,â Hagel asserted during the hearing on Nov. 13. âAl-Assad is part of the equation, of course [but] just alone dealing with al-Assad, where we are now ... thatâs not going to put ISIL back in the box.â

âWe could change al-Assad today, and thatâs not going to change all the dynamics. Who are you going to replace al-Assad with? What kind of an army can take on ISIL?â Hagel added.

CNN reported that Obama had asked his advisers to review the administrationâs Syria policy after determining it may not be possible to defeat ISIL without removing al-Assad.

Turkey has long insisted that only a strategy including the ousting of the al-Assad regime would be effective in defeating ISIL.

In remarks made on Nov. 14, a day after the denial of the reports, Turkish Prime Minister Ahmet DavutoÄlu said he welcomed them, describing such steps as âthe right approach to the Syrian issue.â
He stressed that Turkey had long argued that an integrated strategy was needed to solve the Syrian crisis, rather than a âpoint...

Yemen's warring parties accuse each other of attacking pipeline