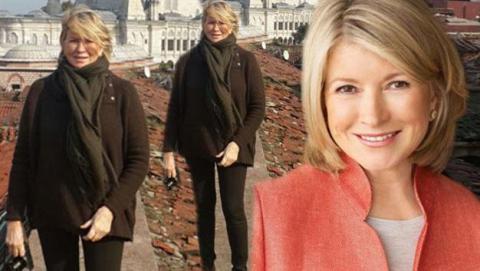 After describing this shopping session as a âcomedy,â SemercioÄlu stressed the discrepancy between Stewartâs fortune and the cheapness of the fake bags she bought.

âI wonder how Martha, whose name is being used as a brand in the decoration, beauty, food and entertainment sectors, would react if her products could be bootlegged and sold in the United States,â he noted.

SemercioÄlu also wrote that Carlos Dunga, the coach of Brazilâs national football team, was another famous customer of fraudulent designer bag stores at the Grand Bazaar.

Stewart, who in 2004 spent time in prison on felony charges, was the keynote speaker of Brand Week Istanbul, organized Nov. 3-8. As the founder of Omnimedia, Stewart was praised in the Turkish eventâs press release as âthe genius of content marketing.â Her speech on Nov. 4 was titled âHow to Become a Lovemark.â

âTraffic is awful, but the city is wonderful. It is so beautiful that I may move to Istanbul one day,â Stewart had told HÃ¼rriyet writer Saffet Emre TonguÃ§ after admiring the view on the roof of the 559-year-old Grand Bazaar that houses over 3,000...