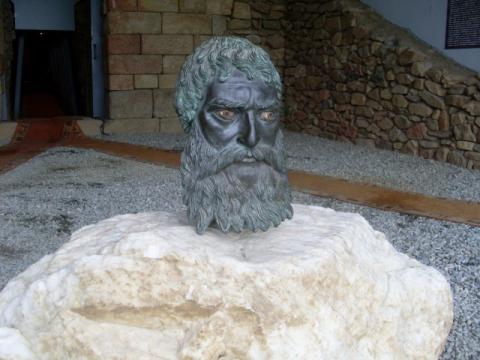 Replica of the bronze head of Seuthes III. Photo: Panoramio.com

Bulgaria will exhibit Thracian treasures in the Louvre in Paris next year, reports the Standart daily.

The exhibition "Antique Thrace - The Odrysian Kingdom" will feature the Panagyurishte golden treasure and 325 exhibits - mostly golden and silver items from various treasures.

Another notable exhibit will be the bronze head of the Thracian king Seuthes III, uncovered 10 years ago in a Thracian tomb in the Valley of the Thracian Kings near Kazanlak. This would be the first time this statue will be exhibited abroad.

The artifacts were gathered from 12 museums in Bulgaria by the curator Prof. Totko Stoyanov. Another 10 museums abroad will lend items from their collections to the exhibition.

The items in the exhibition were evaluated by insurers at EUR 165 M, according to the Standart daily report.