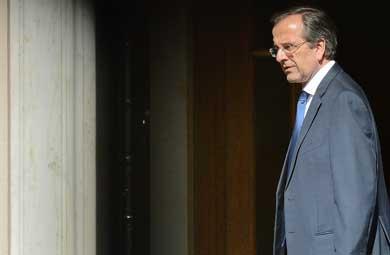 Government officials were seeking ways to bridge a rift with the countrys international creditors over the weekend after the budget for 2015 was submitted to Parliament without the troikas approval. Sources, however, indicated that Athens would accept no more austerity measures and Prime Minister Antonis Samaras was said to have telephoned some of his eurozone peers in a bid to seek a political solution.

We are focused on trying to reach a deal but this will not be done at any cost, a senior government official told Kathimerini.

With the troikas latest review still suspended, Athens has essentially missed the deadline for a Eurogroup summit on December 8 when, it had hoped, the countrys post-bailout prospects could be discussed. Now, officials in Athens hope an emergency summit can be convened later in December to discuss the outlook for Greece once the European part of its bailout expires at the end of the year. For that to happen, however, the troikas review must resume but the gulf between the two sides had not been breached over the weekend. The key point of contention remains a so-called fiscal gap for next year, which the troika sees at between 2 and 3 billion euros; Athens, for its part, contends that there is no such gap and that authorities will meet a target for a near-balanced budget.

For an agreement to be reached on a post-bailout scenario for Greece in time to gain the approval of eurozone parliaments before they close for the Christmas holidays, such a meeting would need to be held by December 19 at the latest. Still, it remained uncertain over the weekend what stance will be taken by the other euro member states. Greece wants to emerge early from the International Monetary Funds arm of the bailout, which is set to end in...