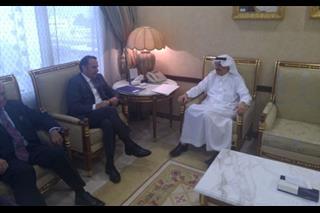 BELGRADE/RIYADH - Serbian Deputy Prime Minister and Minister of Trade, Tourism and Telecommunications Rasim Ljajic and Crown Prince of Saudi Arabia Salman bin Abdulaziz Al Saud agreed in Riyadh on Sunday for a Saudi political and business delegation to pay a visit to Serbia.

Abdulaziz Al Saud said that the door of Saudi Arabia is open to any kind of cooperation with Serbia, stressing that he appreciates Serbia opening an embassy in Riyadh.

He added that he will instruct the Saudi Ministry of Foreign Affairs to open an embassy in Belgrade as soon as possible.

A visit of a political and business delegation of Saudi Arabia has been arranged at the meeting. The delegation will visit the relevant institutions of Serbia to define the areas where a stronger economic cooperation could be established, Ljajic's office said in a release.

The businessmen set to visit Serbia will include the officials of Salik, Saudi Arabia's largest agricultural company and an investor in food industry in foreign countries.

As announced at the meeting, Salik will include Serbia in its list of cooperation priorities, which currently contains only 23 countries around the world.

Ljajic and Abdulaziz Al Saud agreed that the signing of agreements on economic and technical cooperation, investment protection and avoidance of double taxation would add to the strengthening of bilateral economic ties, adding that cooperation in tourism offers significant development opportunities.

During his visit to the Kingdom of Saudi Arabia, Ljajic met with Minister of Economy and Planning Muhammad Al-Jasser, President of the Saudi Commission for Tourism and Antiquities Prince Sultan bin Salman bin Abdulaziz Al Saud, and Director of Salik...

Stoltenberg to hold separate meetings with Vucic, Kurti next Wednesday

Tabakovic: I see myself only as NBS governor

Momirovic: Next government's policy more important than its makeup

Over 20 countries to be represented at Belgrade wine fair