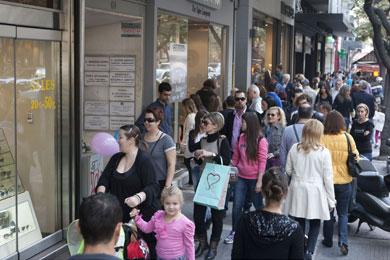 Like most Greek companies, Electroniki has slashed prices to hold on to consumers hit by recession. "Small appliances, big discounts" read flyers it recently stuffed under doors.

"We couldn't avoid cutting prices," says Chief Executive Yannis Stroutsis. "People were holding back ... because they didn't know whether they would have a job in six months' time."

Greece has muddled through 20 consecutive months of deflation, or continuously falling consumer prices - a phenomenon that economists say could soon infect the whole euro zone. In October, prices fell 1.7 percent from a year earlier.

Yet alarm over low inflation in other parts of southern Europe does not echo in Greece.

"The deflationary period has not been a concern for the Greek economy, but rather is a relief for distressed households," say Nikos Magginas, an economist at National Bank, the country's biggest lender.

Economists say prices in Greece were unreasonably high for a long time. Between 1995 and 2010, consumer prices rose 17 percent more in Greece than in the euro area overall.

Lower prices have since made Greek products more attractive.

Of course, continuing deflation would make it harder for Greece to pay down its debt - the largest in the euro zone as a percentage of Gross Domestic Product.

Still, now the price adjustment has largely been made, economists expect prices to start rising again next year as the economy grows. And Greeks are traditionally big spenders.

Central bank data shows that between 2000 and 2010, Greeks spent more than 71 percent of GDP on private consumption like food and entertainment,...