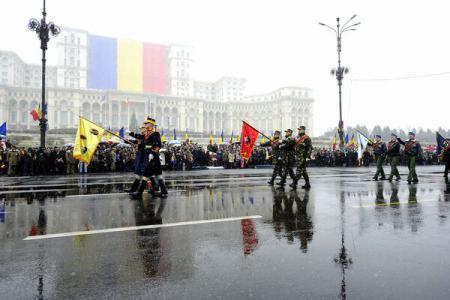 The military parade on the occasion of Romania National Day - December 1 - started with the arrival of incumbent president, Traian Basescu at the Constitution Square in front of the Parliament Palace in Bucharest, at 11:00 a.m.

The president hailed the military gathered there, after that the national anthem was sung.

The parade organised by the National Defence Ministry (MApN), together with the Interior Affairs Ministry (MAI), the Romanian Intelligence Service (SRI) and the Dignitaries' Protection Service (SPP) is also attended by the Prime Minister, Victor Ponta, alongside the Defence minister, Mircea Dusa, the Interior minister, Gabriel Oprea and the Chamber of Deputies' Speaker, Valeriu Zgonea.

Guests from the USA, Turkey, France, Poland and the Republic of Moldova are present to attend the military parade.

The National Day is honoured with the presence of more than 2,800 troops, 280 vehicles, 40 aircraft and 55 horses.

On behalf of the MAI are parading representatives of the Police, the General Inspectorate for Emergency Situations (IGSU), the Border police and the Gendarmerie, students with the Police Academy and, as a first, agents of the Vasile Lascar Police Agents' school of Campina.

Also as a first a search-rescue urban unit with the IGSU accredited for interventions under the UN in the disaster and calamities areas, is parading.