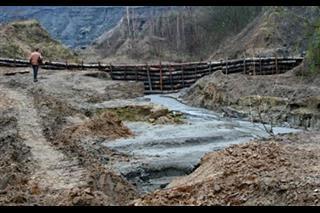 KRUPANJ - The first phase of repair of the former antimony mine Stolice tailing pond in Kostajnik, western Serbia, which was damaged in the massive May flooding, has been completed and a new water analysis of the nearby Kostajnik River will be done soon.

In less than a month, much before the deadline, the construction of 1,300 meters of canal for collection and drainage of stormwater and flash floods has been completed under the direction of copper mining and smelting complex RTB Bor.

The works have also been completed on a dam which si to hold back flash floods and a concrete dam for collection and drainage of normal and flood levels of water, as well as five large dams with geotextile and straw filters.

Kostajnik Municipal President Zoran Obradovic told Tanjug that the dams are functional for the time being, adding that he hopes that things will remain this way.
"We hope that this will be enough for the winter, and in spring we will launch the second phase of repair, including fortifying of the large dam," said Obradovic.

Krupanj Municipal President Rade Grujic told Tanjug on Monday that the municipality, where the mine is located, has requested from the Public Health Institute in Sabac to take water samples and carry out analyses.

During the catastrophic flood on May 16, the tailing pond was flooded, the smaller of the two dams was breached and tailings tumbled into the Kostajnica River.

The repair work on the tailing pond of the Stolice mine, which has been owned by Concern Farmakom since 2007, is financed from the state budget with RSD 16 million.

Vucic to meet with Sarrazin on Tuesday

Stefanovic: EU is where Serbia sees its place

Brnabic: Pressure on Serbia over Russia sanctions to become even stronger

Selakovic thanks Brazil for support on Kosovo-Metohija issue

Vucic: Serbia under great pressure due to Russian interests in Ukraine