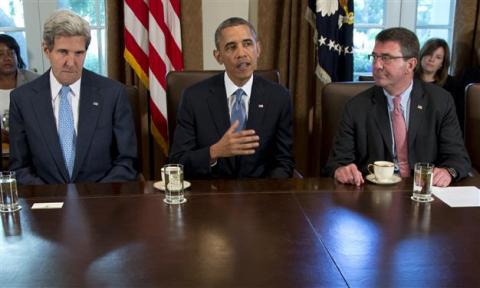 In this Sept. 30, 2013 file photo, then-Deputy Defense Secretary Ashton Carter, right, listens a President Barack Obama speaks to members of the media in the Cabinet Room of the White House in Washington. AP Photo

Administration sources said on Dec. 2 that U.S. President Barack Obama has settled on the 60-year-old Ashton Carter as his fourth defense secretary, with an announcement expected in coming days once he is thoroughly vetted.

Carter would replace former Republican Senator Chuck Hagel who, like his predecessors Robert Gates and Leon Panetta, complained about White House micromanaging of the Pentagon and felt he had a lack of influence over decision-making, according to sources familiar with Hagel's tenure.

The next defense chief will join a national security team facing crises on multiple fronts - from the U.S.-led fight against Islamic State in Iraq and Syria to Russia's aggression in Ukraine, global efforts to contain Iran's influence and an increasingly assertive China.

Carter, a theoretical physicist with no uniformed military experience, has toiled away in high-ranking positions within the Pentagon in recent years, largely outside the glare of the media. His roles include deputy defense secretary - the Pentagon's No. 2 job - from 2011 to 2013 and a stint as an assistant secretary of defense for 1990s Democratic President Bill Clinton.

He was also the Pentagon's chief weapons buyer from 2009-11 when he led a major restructuring of the F-35 fighter jet program.

Given Obama's adamant convictions about limiting American military involvement abroad after costly wars in Iraq and Afghanistan, Carter will be an important conduit between the White House and generals at the Pentagon.

"The meetings may run better, the process may run better, but the fundamental challenges to the policy remain the same no matter who sits at the top of the Pentagon," said Aaron David Miller, a Middle East expert at the Woodrow Wilson...

Epstein probe gets 'zero cooperation' from Prince Andrew: US prosecutor

Trump sends condolences to Erdoğan over quake in Turkey