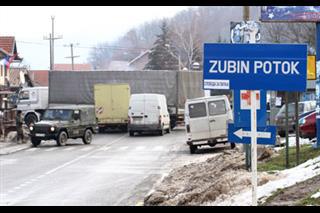 BELGRADE - Stevan Vulovic, mayor of the Zubin Potok municipality in northern Kosovo, has voluntarily appeared for questioning before the public prosecutor of the Basic Court in Kosovska Mitrovica, EULEX spokeswoman Dragana Nikolic-Solomon has told Tanjug.

Vulovic is charged with organizing the escape of Slobodan Sovrlic from the police station in Zubin Potok.

Several persons from the majority Serb municipality of Zubin Potok made a raid at the police station and forcibly freed Sovrlic in March this year.

In mid-July, acting on a EULEX prosecutor's order, the Kosovo police attempted to deliver interrogation summons to Vulovic and former president of the Zubin Potok municipality Slavisa Ristic Vulovic, but they could not find them at their home addresses.

Vulovic and Ristic had been outside of Kosovo until recently, and Ristic voluntarily appeared for questioning at the Basic Court in northern Kosovska Mitrovica on December 1. It lasted for six hours.

Ristic is suspected of committing 15 criminal offenses, including the murder of Kosovo police officer Enver Zumberi, which occurred on July 26, 2011, during attempts by the special unit of the Kosovo police (ROSU) to take control of the Brnjak administrative crossing in the far north of Kosovo.

A EULEX judge ordered Ristic to report to the police station regularly pending trial, banned him from approaching witnesses and seized his passport, his lawyer, Ljubomir Pantovic, told Tanjug after the questioning.