Calculators out for Roma-City decider 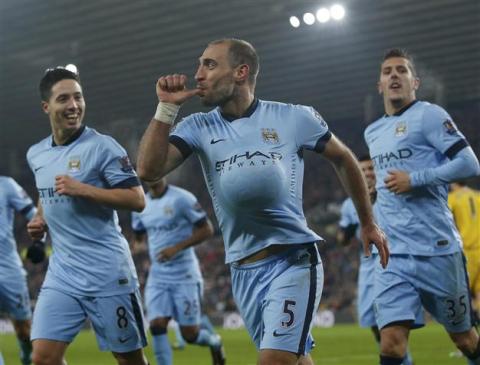 The calculators will be out in force as AS Roma and Manchester City clash for a place in the last 16 of the Champions League on Dec. 10 with outsiders CSKA Moscow lurking in the background.

The head-to-head rule which UEFA use to separate teams who are level on points means that all sorts of complex connotations are possible as the three sides bid to follow runaway Group E leaders Bayern Munich into the next round.

Manchester City have never won a competitive match in Italy in four previous attempts and, even if they break that taboo, could still suffer another premature group stage exit.

Roma's fate is in their own hands as a win will be enough for them while a draw, paradoxically, could send either themselves or City through, depending on CSKA's performance.

"City are obliged to win. They have all the pressure. Not Roma. City are in the same period that Chelsea used to be before they won it. It becomes complex until you win the trophy," Roma's Ivorian striker Gervinho told British media.

Roma, City and CSKA all have five points from five games after mediocre campaigns in a group dominated by Bayern.

A win for Roma, still in the hunt despite losing 7-1 at home to the Bavarians, will guarantee them a second place finish, even if CSKA also win, as the Serie A side would have the better head-to-head record against the Russians.

The rule fun begins if Roma and City draw. If CSKA also draw, Roma would go through, and if the Russians lose, it would come down to the head-to-head record between the Serie A and English side. A goalless draw...

COVID-19: By Next September Italy May Vaccinate the Entire Population

Greece, Bulgaria being taken to court by EU over air pollution
GeneralElection2020/748 polling stations abroad for 2020 general election, up from 417 in 2016
Arrivals in tourist accommodation units, 54.4 pct decrease in October