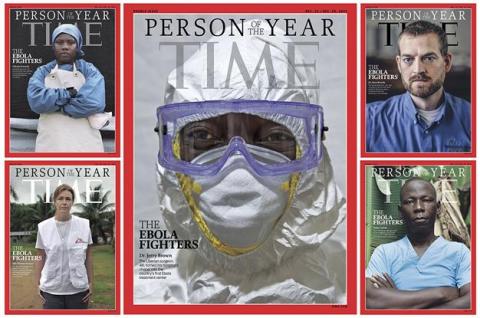 Time magazine on Dec. 10 named as its "Person of the Year 2014" the medics treating the Ebola epidemic that has killed more than 6,300 people, paying tribute to their courage and mercy.

The hemorrhagic fever mushroomed from an outbreak into an epidemic in Liberia, Guinea and Sierra Leone, and there have been scattered cases in Nigeria, Mali, Spain, Germany and the United States.

"The rest of the world can sleep at night because a group of men and women are willing to stand and fight," wrote Time editor Nancy Gibbs, announcing the prestigious annual title.

"For tireless acts of courage and mercy, for buying the world time to boost its defenses, for risking, for persisting, for sacrificing and saving, the Ebola fighters are Time's 2014 Person of the Year."

The worst ever Ebola outbreak has left more than 6,300 people dead worldwide, nearly all in Sierra Leone, Guinea and Liberia.

Time said the virus struck doctors and nurses in unprecedented numbers, "wiping out a public-health infrastructure that was weak in the first place."

Nina Pham, a Texas nurse who contracted Ebola while caring for the first patient diagnosed with the killer virus on US soil, said she was delighted to be part of the accolade.

"So honored to be a part of @Time Magazine's POY!" she tweeted.

Pham and another nurse at Texas Health Presbyterian Hospital in Dallas became infected with Ebola while caring for Thomas Eric Duncan, who died on October 8.

Duncan was diagnosed with the disease after travelling from his homeland Liberia to the United States, where he was initially sent home from hospital.