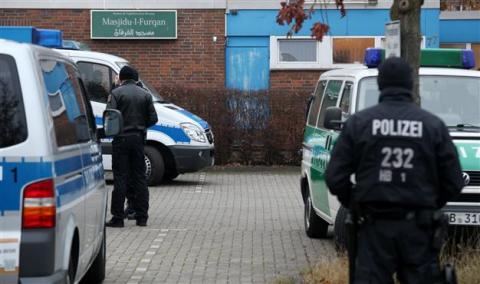 Police are seen during a raid on the building of the Salafist Culture and Families Association in Bremen, northen Germany on Dec. 5. AFP Photo

Germany's justice system is struggling to cope with waves of suspected jihadists returning from Syria and the speed at which young Muslims are being radicalised, the top public prosecutor said on Dec. 11.

Federal Prosecutor General Harald Range said his office was  investigating 46 of the most serious cases, involving 83 people suspected of offences like belonging to Islamic State in Iraq and the Levant (ISIL) or al-Qaeda. Regional prosecutors were investigating 100 more.

That is a huge increase on the five investigations of eight suspects that prosecutors had to deal with in 2013.

"We are at the limits of our capacity," Range said, adding that waves of new cases were pending and Germany was "in the crosshairs of jihadist terror."

"What worries me is the speed with which people are radicalising, or being radicalised. We are facing a phenomenon which needs a broad strategy of prevention," he said.

Like their counterparts in Britain, France and other Western countries, German security officials are concerned at the numbers of people travelling abroad to join militant Islamist groups, then potentially returning to plot attacks at home.

A court in Frankfurt last week jailed a home-grown jihadist for almost four years after he admitted joining ISIL in Syria, in the first trial in Germany over membership of the insurgent group.

Another trial is under way in Stuttgart of a Lebanese man who admitted joining ISIL in Syria, then returning to Germany to buy military and medical supplies for them.

Security forces estimate that about 550 people have left Germany for Syria or Iraq, of whom some 60 have been killed and about 180 are believed to have returned to Germany.