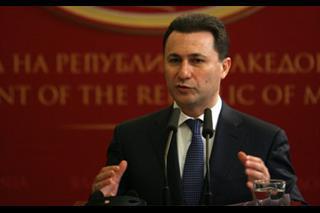 BEOGRAD - The Third Meeting of China and CEECs is expected to create possibilities for further successful cooperation among all the countries from this region, Macedonian Prime Minister Nikola Gruevski said in an exclusive opinion piece for Tanjug ahead of the Third Meeting of Heads of Government of China and Central and Eastern European countries in Belgrade, which Tanjug publishes in full.

The Republic of Macedonia has achieved good economic progress; we finished last year with the third best GDP growth in Europe, and in the first six months of 2014 we had the second highest GDP growth at the European level. We are also focused on capital investments in infrastructure, we are building three highways and a railway to Bulgaria.

It is important for the investors that in addition to the qualified labor force, Macedonia has the lowest costs of doing business in Europe and the Government is fully committed to creating a good business climate. That is our main focus and it gives concrete results, which was confirmed by the investment wave when over 20 foreign companies made a decision or started to invest in Macedonia, only in the last 7 months.

In the World Bank's Doing Business report for 2006, the country was at the 94. position, and today, according to the most recent report, it is at the 30. position. "Forbes" ranked Macedonia at the 36 position as the best country for doing business in the world, which was progress of 46 positions in the last 5 years, and in the Index of Economic Freedom of the Heritage Foundation, the position of Macedonia was improved from 78 to 43 place.

Our strategic determination is the constant improvement of the business environment and continuation of investment in capital infrastructure. We...