The new ministers of Ponta Cabinet are sworn in 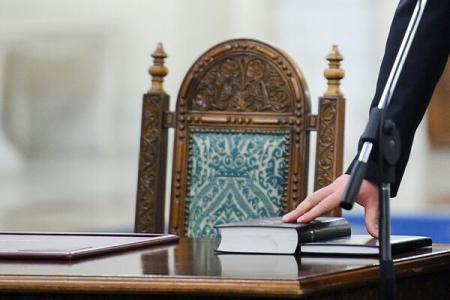 The new ministers of the Ponta Cabinet were sworn in on Wednesday, at the Cotroceni presidential Palace, in front of incumbent president, Traian Basescu.

Three dignitaries of the former Cabinet who have changed portfolios, were also sworn in: Liviu Dragnea and Daniel Constantin, who lose their positions of deputy-prime ministers, but keep the ministries they have previously run — Regional Development and Agriculture, respectively. The third one is Darius Valcov, who is going to head the Public Finances Ministry, after previously being minister-delegate for the Budget, a field which now joined the Public Finances.

The Government proposed by Prime Minister Victor Ponta has been validated on Monday by the joint Chambers of the Parliament 377 to 134 votes.