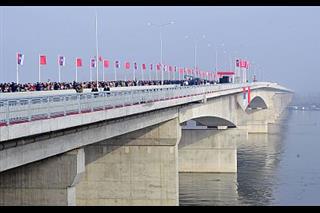 The opening of the bridge is the most important part of the Chinese delegation's visit to Belgrade on the occasion of the Third Summit of China and Central and Eastern European countries, since this is an event which celebrates the deeds, not the words, Vucic said after the opening ceremony.

The Serbian prime minister underlined that it is a great honor for him to open this bridge together with his Chinese counterpart, which is the first undertaking by Chinese builders in Europe, and a lasting monument of the Serbian-Chinese friendship, stressing that the bridge is only the beginning.

"We will not stop, we will continue to build tirelessly. In 2016 and 2017, we will complete more rail lines and motorways than any other European country," Vucic said.

Serbia will realize a great number of these projects in cooperation with its Chinese friends, he said.

The Pupin Bridge on the Danube River was built by Serbian and Chinese companies, and this is not only an object, but also a symbol of the man's eternal aspiration for linking up, this bridge fortifies our two nations in friendship and joint ventures, the Serbian prime minister said.

Vucic thanked Serbian President Tomislav Nikolic on continuous support and help in realization of the project, and also President of Republika Srpska Milorad Dodik who, as he put, has always stood by Serbia in realization of important infrastructure projects.

Noting that the contracts on construction of the bridge, which was named after Serbia's great scientist and investor Mihajlo Pupin...