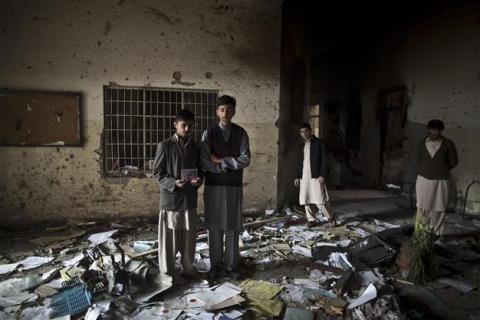 Pakistani students, Waqar Ahmad, left, and Uwais Naser, who survived last Tuesday's Taliban attack on a military-run school, stand at the site, one holding a picture of their headmaster Tahira Kazi, 58, who was killed in the attack, in Peshawar, Pakistan, Thursday, Dec. 18, 2014. AP Photo

A Taliban massacre at a school is "Pakistan's 9/11", the country's top foreign policy official told AFP Friday, saying the assault that left 149 dead would change the country's approach to fighting terror.

The attack on an army-run school in the northwestern city of Peshawar horrified the world and drew promises of swift retribution for the Tehreek-e-Taliban Pakistan (TTP) which claimed it.

"This has shaken the entire Pakistani society to the core, and in many ways it's a threshold in our strategy for countering terrorism," he told AFP in an interview.

Pakistan has long been accused of playing a double game with militants groups, supporting those it thinks it can use for its own strategic ends, particularly in Afghanistan and disputed Kashmir.

But Aziz said that way of thinking was at an end after Tuesday, when heavily-armed fighters went from room to room at the school, gunning down children.

"It was realised that in the end they support each other and that if you do this you're creating space which can become dangerous in the future. So it's a game changer."

The TTP have killed thousands in their seven-year insurgency, but Aziz said the nature of the Peshawar attack was radically different from what had gone before.
...