US congressmen to pay three-day visit to Serbia 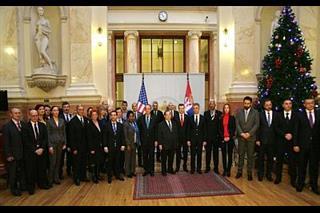 BELGRADE - An eight-member delegation of the United States Congress' House of Representatives has arrived on a three-day visit to Serbia, where it will meet with government and parliamentary officials.

The objective of their visit, which is part of a broader European tour, is to back the process of Euro-Atlantic integration of the countries of the region, the statement said.

They will exchange views with Serbian officials and discuss cooperation, with particular emphasis on matters related to the rule of law, cyber crime and the trade in humans.

During the visit, the US congressmen will also speak to members of the parliamentary committees on the judiciary, control of security services, economy and development and the parliamentary group for friendship with the United States, as well as with representatives of the private and civil sectors.