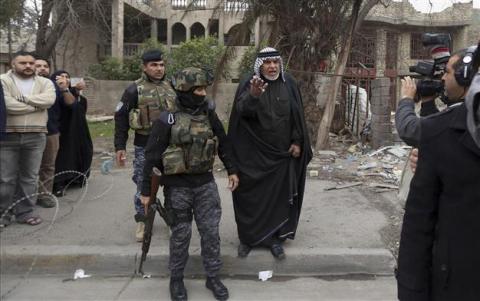 In this photo taken Tuesday, Dec. 16, a man (C) expresses his anger at Haider Ali Motar (not seen) as they perform a scene from 'In the Grip of the Law' a reality show produced by Iraqi state TV, in Baghdad. AP Photo

Haider Ali Motar was convicted of terrorism charges about a month ago for helping to carry out a string of Baghdad car bombings on behalf of the Islamic State in Iraq and the Levant (ISIL). Now, the 21-year old is a reluctant cast member in a popular reality TV show.

"In the Grip of the Law" brings convicted terrorists face-to-face with victims in surreal encounters and celebrates the country's beleaguered security forces. The show, produced by state-run Iraqiyya TV, is among dozens of programs, cartoons and musical public service announcements aimed at shoring up support for the troops after their humiliating defeat last summer at the hands of ISIL, which now controls about a third of the country.

On a chilly, overcast day last week, the crew arrived at the scene of one of the attacks for which Motar was convicted, with a heavily armed escort in eight military pick-up trucks and Humvees. Passing cars clogged the road to watch the drama unfold, but were quickly shooed away by soldiers.

After being pulled from an armored vehicle, a shackled Motar found himself face-to-face with the seething relatives of the victims of the attack. "Give him to me - I'll tear him to pieces," one of the relatives roared from behind a barbed wire barrier.

A cameraman pinned a microphone on Motar's bright yellow prison jumpsuit as he stood alongside a busy Baghdad highway looking bewildered by his surroundings.

"Say something," the cameraman said to him. "What am I supposed to say?" a visibly panicked Motar asked.

"It's a mic check! Just count: 1,2,3,4..." Once the cameras were rolling, the show's host Ahmed Hassan quizzed the still-shackled prisoner. When Motar was confronted by one of the victims, a young man in a wheelchair who lost...