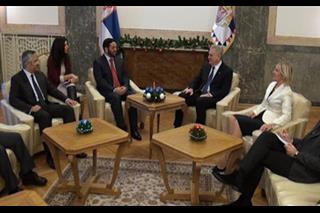 BELGRADE, - Serbian President Tomislav Nikolic talked in Belgrade on Tuesday with a delegation of the United Arab Emirates (UAE) Red Crescent led by Hamdan Musallam Al Mazrouei, chairman of the Board of Directors of that humanitarian organization.

On behalf of Serbia's citizens, President Nikolic extended thanks for the aid that the UAE sent after the devastating floods that hit Serbia in May this year, and assistance in the flood recovery process.

He voiced the hope that the cooperation between Serbia and the UAE will develop even further, and noted that there are many industries in which the two countries could work together.

Hamdan Musallam Al Mazrouei thanked Nikolic for his tremendous personal contribution to stepping up the friendship and cooperation between Serbia and the UAE, the president's office stated in a release.

The UAE is interested in advancing the cooperation with Serbia, and feels that people in Serbia are close to it, he said.
Hamdan Musallam Al Mazrouei informed Nikolic about new projects aimed at building maternity hospitals, in which the UAE Red Crescent will take part as a donor, reads the release.

The UAE Red Crescent delegation is on a visit to the Dragica Nikolic Foundation which participated in the revamp of the maternity hospitals in Kragujevac and Vranje thanks to the Red Crescent's donation.