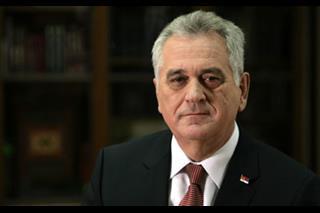 BELGRADE - Serbian President Tomislav Nikolic stated on Wednesday that he is preparing a plan for the solution of the Kosovo-Metohija issues, and expressed hope that he will reach an agreement with the government on this document.

Nikolic said that he will not rush with the preparation of the plan given that such an issue calls for a serious approach, and the dialogue between Belgrade and Pristina is announced to continue early in February.
"At that point, the situation will be much clearer, since the Brussels administration will set out the conditions for the opening of chapters and Serbia's EU accession," Nikolic said.

Nikolic said for Belgrade TV N1 that he also drafted and presented to the public the previous plan, which was used as the basis for the Brussels agreement.
"I came up with the plan. I do not want to hide behind anyone," Nikolic said, adding that therefore it would not be good if he and the government failed to reach an agreement now, when they have done it earlier.

The negotiations between Serbia and the EU should be open, and the Union should specify its conditions with regards to Kosovo-Metohija so that Chapter 35, which refers to the province, could be opened, Nikolic said.
Serbia has showed good will and it wants to solve this issue, but it will not recognize the independence of Kosovo-Metohija, the president said.

Criticizing the outrageous statement by Kosovo Minister of Foreign Affairs Hasim Taci implying that Serbia has practically recognized Kosovo's independence, Nikolic said that Kosovo cannot and must not be recognized.

The Serbian president said that the Kosovo minister is well aware that the possible recognition of Kosovo-Metohija was never on the table.

Belgrade Economic Forum to be held on October 4-5

Matic: Tourists have generated over 8.5 mln overnight stays in Serbia in 2021

We will not allow humiliation, Vucic tells Quint ambassadors

EU: Petkovic, Bislimi to meet in Brussels on Wednesday

Von der Leyen to meet with Vucic in Belgrade on Wednesday

Serb mayors: We do not want northern Kosovo-Metohija to become ghetto

Vucic: In case NATO does not react, Serbia will