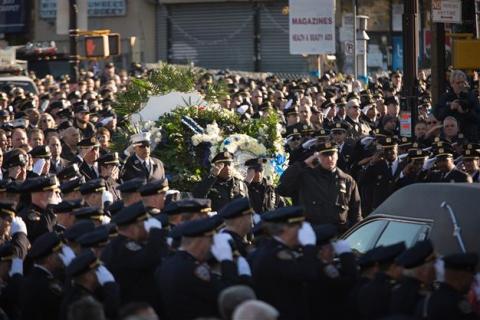 Officers salute outside the church following the funeral of slain NYPD officer Rafael Ramos at the Christ Tabernacle Church in the Glenwood section of Queens, NY. AFP Photo

Thousands of officers paid homage Dec. 27 at the New York funeral of one of their own, in an emotional show of solidarity from a group that has felt targeted by recent protests over police violence.

But in a sign of the strain between New York's force and its mayor, thrown into sharp relief since Rafael Ramos and his partner were shot last week, numerous officers turned their backs outside as Bill de Blasio began to speak.

"When an assassin's bullet targeted two officers, it targeted this city. And it touched the soul of the entire nation," Biden said.

"I believe that this great police force, and this incredibly diverse city can and will show the nation how to bridge any divide," he added.

Giant screens were installed outside the church for the crowd that overflowed for blocks. Amid the thousands of New York police, there were also officers from across the country, including from the states of Indiana, California and Georgia.

Tensions have flared in the United States since this summer over what protesters say is racism and excessive force against black Americans by the police.

Ramos, 40, was killed alongside his partner Wenjian Liu December 20 following nationwide demonstrations after grand juries failed to charge white officers in the killings of two unarmed black men over the summer.

The shooter, 28-year-old Ismaaiyl Brinsley, who later killed himself, had posted angry Instagram comments that were anti-government and referenced the black men's deaths.

Some police and others have pushed back against protesters and claimed officials have been too...