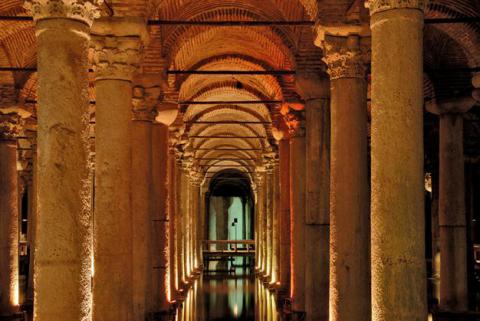 Istanbul's Yerebatan Cistern, one of the most popular tourist attractions in the city, is drawing interest from national and international filmmakers, as well as tourists Constructed over 1,400 years ago, Istanbul's Yerebatan Cistern has in time become one of the city's most famous tourist sites, drawing millions of visitors every year to its splendid columns and mystical Medusa sculptures. Increasingly, however, the cistern is attracting a new breed of person with camera: film directors.

Some scenes of the latest film in the James Bond series, "Skyfall," were made in the museum, while it also opened its doors for Russell Crowe's newest film "The Water Diviner" about the Battle of Gallipoli, said the cistern's operating officer, Cihat Coşkun.

Scenes of a film based on Dan Brown's latest novel "Inferno" might also be shot in the cistern, according to Coşkun. "We haven't got official information about it yet. There are some Turkish firms that they have connections with, but the script is confidential. We don't know anything about the film and its timeframe."

Coşkun said that they had also conducted preliminary talks with the producers of a film about the Ertuğrul frigate, an Ottoman which sank 124 years ago off the Japanese coast, resulting in the loss of more than 500 mariners.

"We have made talks about the film, which is on Turkish-Japanese friendship and set to be made in June. Officials asked us to provide information about the Yerebatan Cistern. They said they would shoot some scenes here. We have also talked about the conditions of the filmmaking and explained our conditions here. They said they would come again after the New Year for formal applications. Since it is an international film, they need...