Fears grow about 40 passengers, including 32 Greeks, possibly missing from ferry 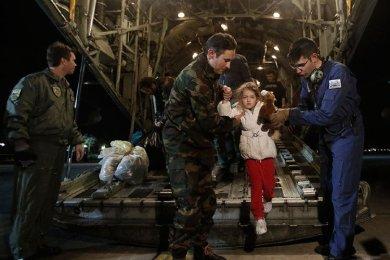 There are growing concerns regarding the fate of 40 people thought to have been on board the stranded Norman Atlantic ferry but who have so far not been accounted for.

Italian authorities indicated that there were 475 people on the ship, of which 425 were rescued. Another 10, including two Greeks, died after a fire broke out on the vessel on Sunday morning as it sailed between Greece and Italy.

This leaves another 40, including 32 Greeks, who appear to be missing. A senior Greek coast guard official is being sent to Italy to help coordinate with authorities there as they try to check the names of those rescued against the ships manifest.

Norman Atlantic passengers arriving back in Greece complained that the fire alarm did not sound promptly and that the crew was not helpful in coordinating the evacuation.

Chrysostomos Apostolou, who was traveling with his family, claimed that crew members abandoned the ship before all the passengers had been evacuated.

There were also claims that some passengers fought their way to the front of the queue of those waiting to be evacuated.

Everyone there was trampling on each other to get onto the helicopter, Christos Perlis, a 32-year-old truck driver told the Associated Press.

The Greek Coast Guard is due to hold a news conference at 2 p.m. local time to provide more details about the rescue operation.