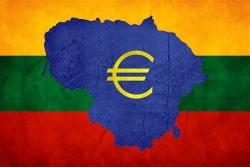 There will be a dual circulation period of two weeks, during which the two currencies will be in use alongside each other in order to allow for a progressive withdrawal of Lithuanian litas.

Lithuania gained its independence from the Soviet Union in the early 1990s.

On Thursday, the country became the last of the three Baltic nations to to adopt Europe's single currency.

Lithuania, which has a population of 3 million people, has been a member of the European Union and NATO since 2004.

January 2015 marks the 15th anniversary of the launch of the single currency in 1999 and the euro is used by some 337 million Europeans.