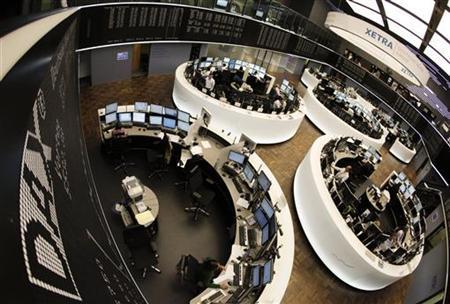 Worries over Greece's future in the euro zone kept shares under pressure on Monday, even as fresh multi-year lows for the euro and crude oil gave a boost to travel and consumer-goods stocks.

The pan-European FTSEurofirst 300 index was down 0.1 percent at 0909 GMT, with benchmark indexes in London and Frankfurt also in negative territory. The Paris CAC 40 stayed flat.

Political uncertainty in Greece was firmly in the spotlight ahead of elections later this month, as German Vice-Chancellor Sigmar Gabriel said the German government wanted Greece to stay in the euro zone.

The Athens ATG index fell 2 percent, with lenders Bank of Piraeus and Alpha Bank down 3.1 to 3.6 percent.

The Jan. 25 election in Greece could vault the left-wing Syriza party into power, raising the risk of a sovereign default and severe losses for the European Central Bank on any Greek bonds it holds.

"I still think that the Greek exit scenario is an outlier,» said Michael Hewson, analyst at CMC Markets. «Any sensible strategy would be to plan for the worst and hope for the best."

Asian shares were also subdued as soft manufacturing surveys soured the mood. The euro hit a nine-year low versus the dollar, with investors stepping up bets the European Central Bank would unveil long-awaited extra stimulus measures in a bid to boost the economy and quash fears of a deflationary spiral.

The travel and leisure sector in Europe was up 1 percent, lifted by the prospect of cheaper oil and a weaker euro feeding improving companies' and consumers' finances.