Samaras to focus on reforms after attack on SYRIZA over migrants, public order 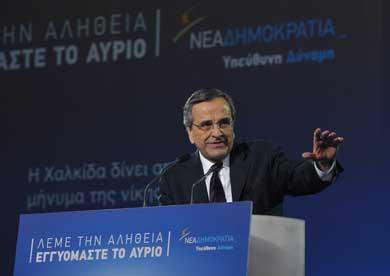 Prime Minister Antonis Samaras is expected to change the focus of his election campaign on Saturday, when he is due to present his party?s economic strategy after concentrating on Wednesday on SYRIZA?s stance on law and order as well as immigration.

Samaras is expected to talk about plans to attract investment and the completion of market reforms. ?From now on we will enter a period of real change, with growth, investment, exports, privatization and use of public property,? he said in a speech in Halkida on the island of Evia.

His appearance came as German Chancellor Angela Merkel stated clearly that she wants Greece to keep the euro. ?I, as German chancellor, and also the German government have always pursued a policy of Greece staying in the eurozone,? Merkel said during a joint press conference with British Prime Minister David Cameron in London.

She said she had ?no doubts whatsoever? that the Greek situation would be brought to a ?successful conclusion,? but stressed Athens needed to continue to respect its commitments if it wanted its partners to show solidarity.

The Greek premier, however, spent much of his address on Wednesday accusing SYRIZA of being soft on key national issues, such as the leftist party?s opposition to maximum-security prisons. ?Why don?t they want them?? he said. ?So the convicts can escape? It is their public position that they want to disband the police.?

In the wake of the terrorist attack on the Paris offices of French satirical weekly Charlie Hebdo, which left 12 people dead, Samaras also raised questions about SYRIZA?s immigration policy. ?You see what is happening in Europe: Everything is changing dramatically,? he said. ?In France, the Socialist [Prime Minister Francois] Hollande has sent the...