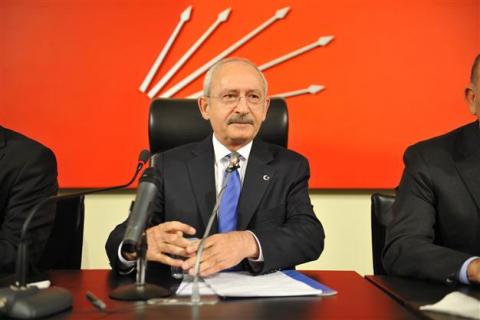 The leader of Turkey's main opposition party has claimed that all his family members and party officials are being eavesdropped on, without specifying who is responsible.

"We are facing serious challenges. The phone conversations of my family members and entire party officials are being wiretapped. All sorts of pressure are being put on us, but no one can intimidate us," Republican People's Party (CHP) head Kemal K?l?çdaro?lu said at a meeting held by the Chamber of Agriculture Engineers on Jan. 12.

K?l?çdaro?lu did not specify who he thinks is eavesdropping on CHP officials, but in earlier statements had openly accused the National Intelligence Organization (M?T) of setting up a special unit to orchestrate a smear campaign against his party.

The CHP is exerting extraordinary efforts to unmask the government's ill-performance, especially in the field of economy, but they face serious obstacles from the government, he added.

"We all have great responsibility," K?l?çdaro?lu said, calling on all intellectuals and artists to explain this to the public.

"We have the 19th biggest economy in the world, but rank 69th in the index of life [standard]. That shows that an important task is on our shoulders, on the shoulders of intellectuals. An ordinary man on the street cannot think in the long term and cannot comprehend the state of economy and politics like an intellectual," he said.

Meanwhile, K?l?çdaro?lu recently met with U.S. Ambassador to Turkey John Bass in a courtesy visit, the CHP said in a written statement.

K?l?çdaro?lu was accompanied by deputy leader Murat Özçelik and met with Bass at the party's headquarters. No statement was issued after the meeting.