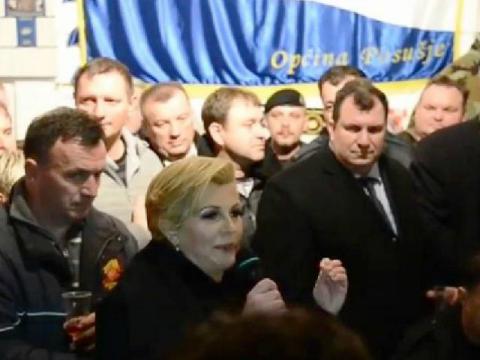 Grabar Kitarovic, the victorious candidate of the opposition centre-right Croatian Democratic Union, HDZ, went to share her unexpected triumph in the early hours of Monday morning with the protesting disabled veterans from the 1990s conflict at the tent they have set up in front of the war veterans' ministry.

After opening the celebration with a minute of silence for all those killed in the war, followed by the Croatian national anthem, Grabar Kitarovic made a speech emphasising that she "will not forget" the veterans after coming to office.

"Nobody will underplay our defensive Homeland War [the name used in Croatia for the 1990s conflict] and call it some kind of a civil war; this I solemnly swear here tonight... I will continue where our first Croatian president, Dr. Franjo Tudjman, left off," said Grabar Kitarovic.

"This is my first working visit; let us celebrate a little tonight, and then we will immediately go to work together for a better Croatia! For too long you have made sacrifices, I understand you; I know what you want and what you are looking for - above all, respect and the war as the foundations of Croatia," she said.

The ex-soldiers have been protesting non-stop for more than two and a half months in front of the war veterans' ministry in Zagreb, demanding minister Predrag Matic's resignation as well as the passing of a constitutional law enshrining their status. The government has so far rejected their main demands.

Protest leader Djuro Glogoski congratulated Grabar Kitarovic on her win, adding that what "has been happening to us during the last two or three years is something we couldn't imagine in 1995" after the war ended.