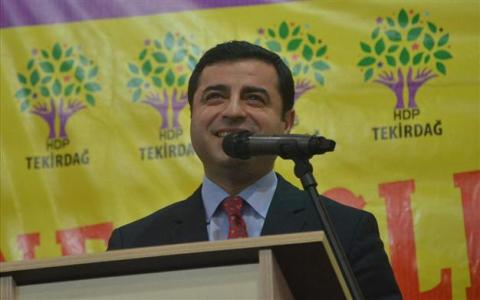 Selahattin Demirta?, the co-leader of the Peoples' Democratic Party (HDP), has said the debate about entering the upcoming general elections with independent deputies is "over," stressing his confidence that the party will surpass the 10 percent election threshold.

"We are determined to go to the polls as a party," Demirta? said in an interview with Haberturk late on Jan. 13.

The HDP went into the 2011 elections with independent candidates to bypass the threshold before founding its parliamentary group, which today has 27 members.

"There is nothing to discuss on this issue," Demirta? said, following a public debate, mainly between himself and Deputy Prime Minister Bülent Ar?nç, over whether the party would succeed in re-entering parliament after the July elections.

The presidential elections on Aug. 10, 2014, encouraged the HDP, as Demirta?, a joint candidate of his party and other small political groups, nearly reached 10 percent against the winner, President Recep Tayyip Erdo?an, and the other opposition parties' joint candidate, Ekmeleddin ?hsano?lu.

"Surveys show that our vote is at around 9.5 percent today and we have not launched an election campaign yet," he said, expressing confidence in the results that efforts by local party organizations would yield.

"Turkey will be introduced to a new HDP," he added.

Entering the elections as a party was a decision they made before the presidential election, Demirta? said, while also once again ruling out any possibility of joining forces with the main opposition Republican People's Party (CHP).