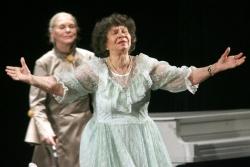 Mutafova celebrated her birthday a few years ago. Photo by BGNES

The tireless Stoyanka Mutafova, also famous for her nickname ''Misis Natural Disaster'', could be entered into The Guinness Book of World Records as the actress with the longest active professional career, reported by Tema Daily.

The official proposal came from the Union of Bulgarian Artists and will be sent to the central office of Guinness. Bulgarian Culture Minister Vezhdi Rashidov met with the Bulgarian ''Queen of comedy" and publicly announced his support for the nomination.

''Our great Stoyanka Mutafova is certainly deserving of this honor, she is a miracle and has been beyond any competition for a long time, so we hope she will stay alive and healthy for many years to come. It is no surprise that she is still a favorite actress to several generations of Bulgarians,'' Rashidov said.

The candidacy of Stoyanka Mutafova has every chance of being approved as her first time on stage was back in 1945 in the National Theatre, while she was still a student at the National Theatre School. Her debut was in the play by Jean Baptiste Mollier ''Scapin's 'Deceits", directed by Stefan Surchadzhiev.