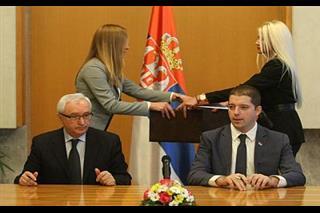 BELGRADE - Director of the Serbian government office for Kosovo Marko Djuric and head of the dairy company Imlek Slobodan Petrovic signed in Belgrade on Wednesday a memorandum of understanding on strategic coopeartion in joint investments and in improving the dairy industry in Kosovo.

Thanks to this document, dairy producers in Serb enclaves in Kosovo can be certain that they will be able to sell their milk, as well as have access to better technology and new markets.

After the signing in Belgrade, Djuric said the cooperation would help develop the dairy industry in Kosovo in the coming months and years and bring life back to the Serb areas, where agriculture had once been one of the main sources of income.

"We have adopted solutions together with Imlek to provide guaranteed option to sell milk, which is one of the requirements of successful production in the dairy industry," Djuric stressed, adding that the farmers would be able to develop together with one of the most successful companies in the industry.

He pointed out that the Serbian government had adopted a programme for 2015 that involved opening more than 30 mini-farms in northern Kosovo, adding that it would also help revive the cattle industry.

He believes this cooperation can serve as an inspiration to all those who wish to help the Serbian people stay in Kosovo and build up the overall economic potential, adding that he hopes similar cooperation will be established with other Serbian and foreign companies in different industries.

The Kosovo market is extremely important to Imlek, which has until now only sold its products there, but never bought any raw material, Petrovic noted.

"We buy milk all over Serbia and there is no reason not to do...