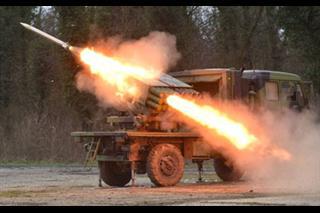 NIKINCI - Serbia successfully test-fired missiles with their newly developed LRSVM Morava multiple rocket launcher on Friday, and the system should become operational with the Serbian Armed Forces (VS) by the end of the year.

The demonstration of what the missile system is able to do, organized at the Nikinci military training area in the Serbian province of Vojvodina, was attended by Defense Minister Bratislav Gasic.

Today is an important day for the VS as we have successfully completed the development and demonstration tests of the Morava missile system after five years of trial testing, Minister Gasic told reporters who attended the firing of Grad 122mm and Oganj 128mm rockets today.

Gasic congratulated all those who took part in the development and construction of the new missile system and the staff at the Nikinci training area for successfully test-firing the missiles.

He observed that the introduction of the new launcher in its military system would place Serbia among the 17 countries that possessed modern weapons of that type and expressed confidence that it would be a great export opportunity for Serbia's defense industry.
"The only country in the region that has a similar missile system is Turkey, which provides Serbia with a great opportunity for exports," he said, adding that he expected the system, 98 percent made in Serbian factories and institutes, to start being mass-produced during the course of 2015.

Director of Serbia's Military Technical Institute Zoran Rajic said that LRSVM Morava was a complex weapon that took a lot of knowledge and technology expertise from Serbian experts to be developed.

Rajic pointed out that the development of the missile system had been completed in five years'...