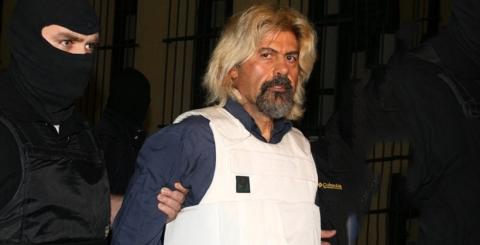 Shril allegations of “rat” and “snitch” were the scathing barbs aimed by members of a jailed urban terror gang on Tuesday against one-time fugitive and “old guard” terrorist Christodoulos Xiros.
Ten jailed members of the “Conspiracy of Fire Nuclei” – an anti-state urban guerilla group eradicated after a series of botched and intercepted letter bombs in 2010 – went so far as to sign an Internet-circulated letter to that effect.
Beyond claims that Xiros “sold them out” to police, the urban terror suspects essentially painted their one-time comrade as a deluded clown.
In the letter, the nihilist terror gang claimed that fellow guerrillas were planning to blew up a portion of the Korydallos prison wall as part of an escape plan from the Piraeus-area facility where they are incarcerated.
Xiros was one of nearly two dozen members of the once notorious November 17 terrorist group.