Vu?i?: Swedes do not believe in fairy tales 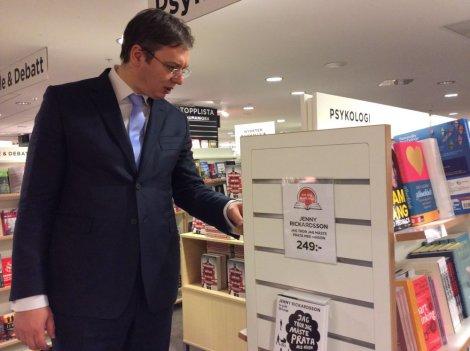 - In Scandinavian countries, it's very important to tell the truth and show commitment, because people here do not believe in fairy tales and easy solutions - Aleksandar Vu?i? said during his visit to Sweden.

Serbian Prime Minister met with Swedish Minister of Foreign Affairs, MP's and representatives of some of the most successful companies in Sweden.

Vu?i? said he expects that Serbia receive have more investments from Sweden, but he also stated "we need to finish many asignments in order to attract Swedish investors to Serbia."

After he met with politicians, and after the speech he held in Business Forum, Vu?i? said that Swedish government members and representatives of main companies such as "Volvo", "Scania" and "Ericsson" had only words of praise for Serbia, "because they believe in our future."

He invited Swedish companies to invest in Serbia, and underlined once again that "the country is dedicated to reforms and making even more favorable conditions for foreign investments."

- We need your experience, support and help. Please, come to Serbia, and those who are already here - stay, and tell us what is that we can do to improve ourselves and become better - Vu?i? said in his speech.