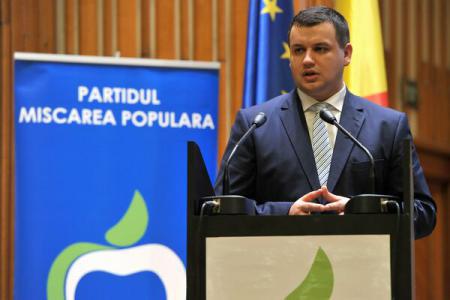 Deputy Eugen Tomac was voted on Sunday at the Congress of the People's Movement Party (PMP) to be the party's chairman, while Dorel Onaca was elected secretary-general.

The 700 delegates present on Sunday at the Parliament Palace, where the PMP Congress took place, also elected Siegfried Muresan to be first deputy chairman of the PMP.

"We will be a party that will be the voice of those who want the political class to treat them with respect and transparency. We want to be the voice of those who look disappointed on the political class. A Romania who is involved (e.n. ? the title of his chairmanship bid) means a different kind of politics. You have invested in a young party, but I assure you that the trust you placed in us is not without purpose. I am convinced that together with Traian Basescu the PMP will win the elections and will put Romania on the map where it belongs, together with the other European nations. We want to crush this chubby USL [Social Liberal Union] that has shrank a bit and is already boring us", said Tomac after the election results were announced. AGERPRES