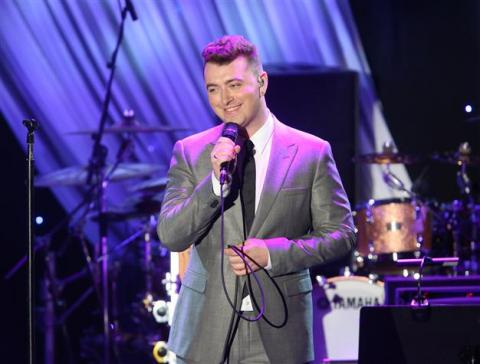 Fresh-faced Sam Smith could make history Feb. 8 at the Grammys with a chance to sweep top categories, but the music industry's big night could also coronate Beyonce or Pharrell Williams.

The 22-year-old Smith, who a few years ago was bartending in London, has enjoyed a phenomenal rise with "Stay With Me" -- a ballad about a one-night stand marked by rich, soulful tenor voice.

Smith, who will also perform at the ceremony at the Staples Center in Los Angeles, said the sensation of appearing before a global audience was "indescribable" and recalled attending the year before.

"I was in the back -- the very, very back. And I couldn't go to a party afterward because I had to record something in my label's building the next day," he said.

Only one artist has previously won all four categories at once -- Christopher Cross, whose 1981 triumph heralded a decade of soft rock as he controversially beat out Pink Floyd's now-classic "The Wall."

But Smith is tied with two big names for a total of six nominations -- Beyonce and Williams.

A Grammy victory for Williams would serve as vindication for the 41-year-old producer who achieved success in his own right with the globally viral song of optimism, "Happy."

In a forum on Twitter, Williams said that he recorded nine versions of "Happy" that were rejected before he came up with his hit.

"I had to change my approach to writing it -- stop thinking and start feeling...