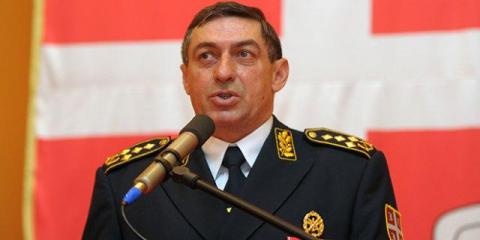 BELGRADE -- The most important political and security challenge for Serbia is the situation in Kosovo and Metohija, Ljubisa Dikovic has said.

The Serbian Army (VS) chief told the Belgrade-based Danas newspaper that Serbia is, at the moment, not under military threat.

"The greatest security threats are ethnic and religious extremism, international networks of organized crime and illegal migration of people motivated by economic, political and security problems. Another risk is the participation of citizens of Balkan states in armed conflicts in the Middle East," Dikovic said.

The recent terrorist attacks in France "clearly show that the security environment has changed and that modern society is vulnerable when it comes to new and asymmetric threats," the general added.

"The threat of terrorism in Serbia has so far exhibited in Kosovo and Metohija and in southern Serbia. Current estimates show that the probability of organized terrorist activities in Serbia is small, but individual terrorist acts are not ruled out. The fact is that Serbia with its capacities and cooperation and coordination with international partners can contribute to the prevention of possible terrorist activities. By setting up a permanent working group for the fight against terrorism at the meeting of the Bureau for Coordination of Security Services, held on January 9, chaired by the prime minister, our country has shown that this issue is approached by all relevant institutions with great care, to ensure the safety of citizens," stated Dikovic.

As for the recent accusations against him presented by the Humanitarian Law Center (FHP) NGO, which claims that he committed war crimes in Kosovo in 1999, Dikovic...