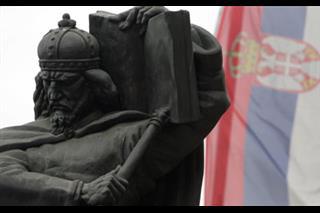 BELGRADE - The Special Department for Organised Crime of the High Court in Belgrade acquitted businessman Zvonko Veselinovic from Zvecan, northern Kosovo, of charges that he illegally claimed 32 trucks owned by Hypo Alpe Adria Leasing together with his associates.

Veselinovic's associate Milan Radojcic has also been acquitted of charges while owner of the Eurokop company Dragan Curcic has been sentenced to two years of imprisonment, the Court released on Monday.

Djurcic's sentence was merged with the punishment of two years of imprisonment adopted in the trial against the so-called 'customs duty mafia', and the integrated sentence totals three years and six months of imprisonment. The Court instructed Djuricic to return RSD 12.9 million to the bank.

The Prosecutor's Office for Organised Crime raised an indictment against Veselinovic and two of his associates in June 2012 on suspicion that they illegally seized 32 trucks owned by Hypo Alpe Adria Leasing.

The vehicles were used by Djuricic's company Eurokop with the seat in Raska, south-west part of central Serbia, in April and June 2008 on grounds of the contract on financial leasing with Hypo Alpe-Adria-Bank.

According to the indictment, they kept the revenues obtained through use of the vehicles and thus illegally obtained property gain of at least RSD 237 million.

KFOR marked Veselinovic as one of the organisers of the riots back in September 2011 when Serbs tried to prevent setup of the Kosovo police and customs duty through protests on administrative crossings between central Serbia and its southern province.

The Serbian police arrested Veselinovic and his brother Zarko in Kopaonik on December 20, 2011.