Istanbul braces for more snow as traffic disrupted with accidents 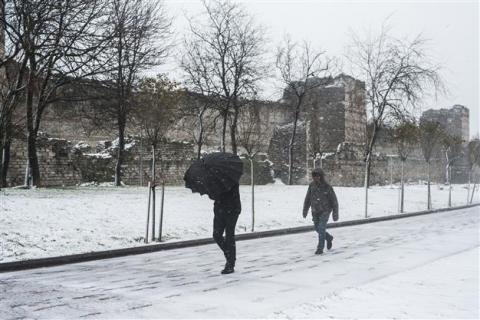 Around 18 vehicles were involved in a multiple collision accident on the TEM highway on Feb. 11 in western Istanbul as snowfall in the city and surrounding regions has been continuing.

The pile-up reportedly occurred on the TEM highway in Istanbul's Silivri district, closing all lanes and affecting traffic in both directions. One person was killed and 10 people were injured in the accident, Istanbul Gov. Vasip ?ahin said.

A lane has been also closed on the D-100 highway between the Bak?rköy and Zeytinburnu districts due to another pile-up, causing a traffic jam in the city center.

Another accident has been reported on the D-100 highway between the Asian districts of Maltepe and Kartal.

Schools were closed in Istanbul due to the weather conditions on Feb. 11, a decision the governor office announced on late Feb. 10.

Turkish Airlines cancelled 83 flights on Feb. 10 and 11, but other scheduled flights from Atatürk Airport have been able to depart after the planes underwent an anti-icing process.