US to withdraw troops from Ebola mission in West Africa 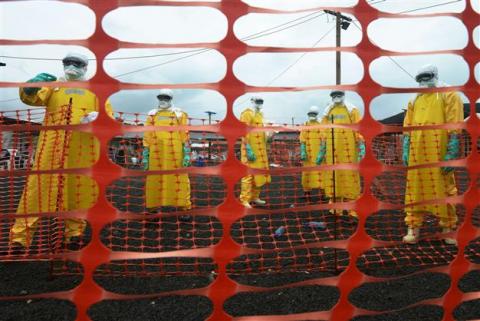 The US military plans to pull out most troops from West Africa that were deployed to help stem the outbreak of the deadly Ebola virus, the Pentagon said on Feb. 10, ending a five-month mission.

A force that at one point reached 2,800 has been scaled back to about 1,300 troops and "nearly all will return by April 30," Pentagon spokesman Rear Admiral John Kirby said in a statement.

The announcement came as the epidemic has begun to recede.

President Barack Obama will on Wednesday declare a next phase in fighting the disease.

"We have bent the curve of the epidemic and placed it on a much improved trajectory," the White House said.

A small team of about 100 US troops will remain in the region to strengthen "disease preparedness and surveillance capacity" of local governments, Kirby said.

At the height of the Ebola outbreak, President Barack Obama approved plans in September for more than 3,000 troops to head to Liberia and Senegal.

But the full contingent never had to be ordered in as the tide began to turn in the effort to contain the virus.

The US forces, most of whom were stationed in Liberia, constructed Ebola treatment units, trained health workers, provided logistical support for aid agencies and set up labs to test blood samples, Kirby said.

When an American who traveled to Liberia died from the virus last year, public fears spiked in the United States and Washington officials scrambled to take measures to prevent any possible outbreak.
Although US troops in Liberia and Senegal had no contact with patients, the Pentagon placed all military personnel returning from West Africa in temporary quarantine as a...

France to give priceless artworks back to Benin

Senegal’s old capital on the frontline against rising sea

Diaspora Int'l Short Film Festival to kick off on Aug 27