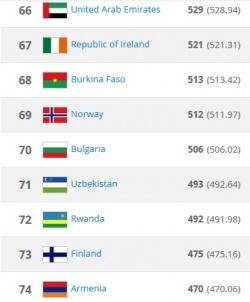 The Bulgarian national football team dropped four positions in the latest FIFA world ranking, which was released on Thursday.

At present Bulgaria occupies the 70th position with 506 points, being one place behind Norway, which is one of its direct opponents in the qualifications for EURO 2016.

In the past several months Bulgaria registered a drop of 24 places in the ranking, daily Dnevnik reports.

Bulgaria's other main opponents in the qualifiers - Italy and Croatia, occupy respectively 11th and 19th position.

Bulgaria faces Italy in its next match from the European qualifiers, which is scheduled to take place on March 28 at the Vasil Levski national stadium in Sofia.

At present Bulgaria occupies fourth position with four points in Group H, being five points behind Norway and lagging behind joint leaders Italy and Croatia with six points.