10 things you may not know about Yanis Varoufakis (photos+videos) 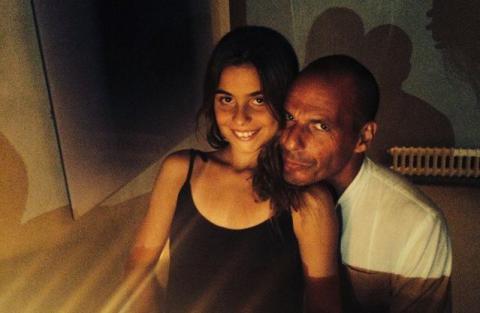 1. He writes his name with one n instead of two because of a conflict with a teacher in primary school. He liked seeing it with one n, she kept insisting two. Once she marked down an exam from 10/10 to 8/10 for this reason. When 13, he found a book by Yianis Kordatos who also prefered the one n spelling and that was the end of it?

3. He always enjoyed holidaying on the isle of Crete, and especially sought nudist beaches. There are no beach photos as yet.

4. Everyone knows of his career as an academic, but few people know that he had his own radio show in Australia. The show had a cult following and he soon became known as the "Greek Idol".

5. He is a fanatic radio collector and has many rare albums in his extensive vinyl collection.

6. Apart from his own blog, he has written a number of articles for the Greek press, including for free press Lifo, the electronic website that was begun by centrist Potami leader Stavros Theodorakis. Here he is dressed up as a hooligan to promote the site.

8. He told Stern that he moved to Texas after receiving death threats on the life of his son when he was investigating Greek banks.

9. He inspired the Varoufunky cocktail?

10. A face expert states that his big eyes show confidence and decisiveness, his large elbow shows that he is quite impulsive and perceptive. The shape of his ears represents a need to be different and at the center of everything. A stubborn nose and decisive mouth show energy and drive.