Serbia "in line of fire" over Ukraine, says U.S. official 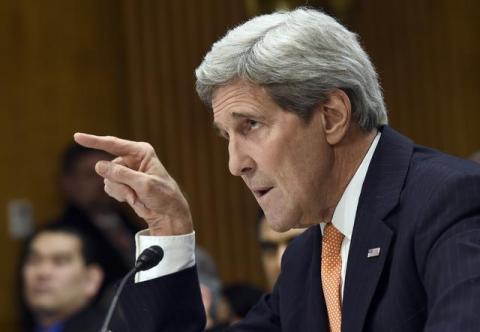 Serbia "in line of fire" over Ukraine, says U.S. official

WASHINGTON -- The United States thinks a number of European countries, Serbia among them, are "in the line of fire" when it comes to relations between Washington and Moscow.

U.S. Secretary of State John Kerry was appearing before a U.S. Senate subcommittee when he was asked about "the growing influence of Russia in Europe."

He also told the subcommittee it was Russia that "engaged in a rather remarkable period of the most overt and extensive propaganda exercise that I've seen since the very height of the Cold War."

"And they have been persisting in their misrepresentations - lies - whatever you want to call them about their activities there to my face, to the face of others on many different occasions."

The war there has so far claimed the lives of more than 5,600 people.

Members of the U.S. Congress want U.S. President Barack Obama to approve sending arms to Ukraine, something opposed by many European countries.

As he addressed the subcommittee on Tuesday, Kerry did not wish to state his position on the issue, but said it was "under active consideration."

U.S. Senator Christopher Murphy remarked during the hearing there was concern that the debate about sending arms to Ukraine was overshadowing "a far bigger project that is unfolding before us" - and that is "the spread of Russia's influence."