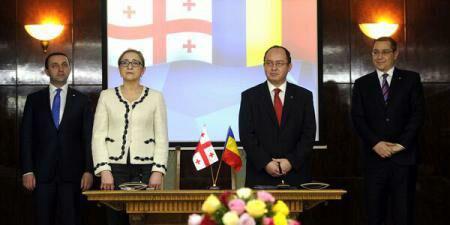 The Romanian and Georgian Foreign Ministers, Bogdan Aurescu and Tamar Beruchashvili, respectively, have signed, on Friday, at the Government House, in the presence of the two countries' Prime Ministers, Victor Ponta and Irakli Garibashvili, a program of collaboration between Romania and Georgia in the realms of culture, education and science, mass-media, youth and sports.

At the end of the signing ceremony, the two Prime Ministers held official talks with the participation of the two delegations.

Prime Minister Victor Ponta hailed the visit of his Georgian counterpart to Bucharest and congratulated him for the successful visit he conducted to Brussels. The Romanian Prime Minister reaffirmed, in context, the fact that Romania remains a powerful supporter of Georgia's accession to the European Union and NATO.

Ponta also emphasized that Romania supports, in equal measure, the accession to the Euro-Atlantic structures of Georgia, the Republic of Moldova and Ukraine.

The Georgian Prime Minister stated, in his turn, that he is glad to be on his first official visit to Romania and admitted the fact that Romania, through the authorities in Bucharest, has proven to be a great supporter of Georgia's accession to the European Union and the Northern Atlantic Alliance. Irakli Garibashvili also thanked his Romanian counterpart for his personal contribution brought to supporting Georgia's European and North Atlantic endeavors.

At the end of the official talks, the Romanian and Georgian Prime Minister will issue a joint press statement.

During the visit that he is conducting to Bucharest, the Georgian Prime Minister has scheduled, for Friday, meetings with the Speakers of the two...