Torrents of rain cause flooding in Attica (photos + video) 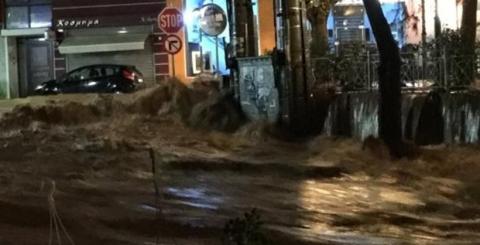 The extreme weather conditions caused problems in Athens. Chaotic images emerged at Mandra, an outer suburb of Athens in West Attica, after Thursday night's heavy rainfall. Streets turned to rivers with people trapped in their flooded homes and stores. In some areas floods reached over a meter. Power was cut.

The fire services managed to evacuate six people trapped in Platonos and Koropoulis streets. Another two people were trapped in their cars under the bridge at the crossroads of the Attica St. highway with Mandra where fire services rushed to the rescue. In a number of areas, the streets are still closed to traffic with the first light of day showing the extent of the damage.

The rush of water, gathered a pack of cars, said the director of the Elefsina Fire Brigade in an interview with private SKAI.

It was a difficult night in a number of areas in West Attica, including Neo Perama and Megara.